Processing speed of the human brain compared to computer 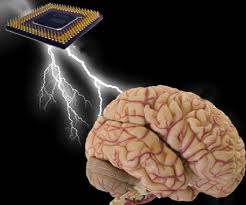 Processing Power and Speed
The human brain - We can only estimate the processing power of the average human brain as there is no way to measure it quantitatively as of yet. If the theory of taking nerve volume to be proportional to processing power is true we then, may have a correct estimate of the human brain's processing power.
It is fortunate that we understand the neural assemblies is the retina of the vertebrate eye quite well (structurally and functionally) because it helps to give us a idea of the human brain's capability.
The retina is a nerve tissue in the back of the eyeball which detects lights and sends images to the brain. A human retina has a size of about a centimeter square is half a millimeter thick and is made up of 100 million neurons. Scientists say that the retina sends to the brain, particular patches of images indicating light intensity differences which are transported via the optic nerve, a million-fiber cable which reaches deep into the brain.
Overall, the retina seems to process about ten one-million-point images per second.
Because the 1,500 cubic centimeter human brain is about 100,000 times as large as the retina, by simple calculation, we can estimate the processing power of a average brain to be about 100 million MIPS (Million computer Instructions Per Second ). In case you're wondering how much speed that is, let us give you an idea.
1999's fastest PC processor chip on the market was a 700 MHz pentium that did 4200 MIPS. By simple calculation, we can see that we would need at least 24,000 of these processors in a system to match up to the total speed of the brain !! (Which means the brain is like a 168,0000 MHz Pentium computer). But even so, other factors like memory and the complexity of the system needed to handle so many processors will not be a simple task. Because of these factors, the figures we so childishly calculated will most probably be a very serious underestimate.
The computer - The most powerful experimental super computers in 1998, composed of thousands or tens of thousands of the fastest microprocessors and costing tens of millions of dollars, can do a few million MIPS. These systems were used mainly to stimulate physical events for high-value scientific calculations.
Here, we have a chart of processor speeds for the past few years.
From the chart above, we can observe some break through s in microprocessor speeds. The current techniques used by research labs should be able to continue such improvements for about a decade. By then maybe prototype multiprocessor chips finally reaching MIPS matching that of the brain will be cheap enough to develop.
Improvements of computer speeds however have some limitations. The more memory it has, the slower it is because it takes longer to run through its memory once. Computers with less memory hence have more MIPS, but are confined to less space to run big programs. The latest, greatest super computers can do a trillion calculations per second and can have a trillion bytes of memory. As computer memory and processors improve, the Megabyte/MIPS ratio is a big factor to consider. So far, this ratio has remained constant throughout the history of computers.
So who has more processing power ?
By estimation, the brain has about 100 million MIPS worth of processing power while recent super-computers only has a few million MIPS worth in processor speed. That said, the brain is still the winner in the race. Because of the cost, enthusiasm and efforts still required, computer technology has still some length to go before it will match the human brain's processing power.